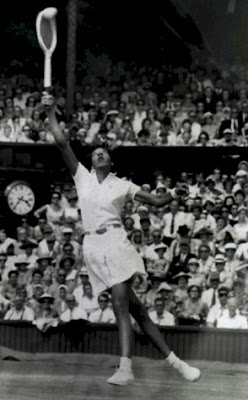 Althea Gibson (1927 – 2003) was an American sportswoman who, on August 22, 1950, became the first African-American woman to be a competitor on the world tennis tour and the first to win a 'grand slam' title in 1957. She is sometimes referred to as "the Jackie Robinson of tennis" for breaking the color barrier.

A pioneer in both amateur tennis and professional golf, Gibson paved the way for the likes of Venus Williams and Tiger Woods. She not only broke barriers in tennis, but she was also the first black woman on the LPGA tour.

Born in Silver, South Carolina, Gibson was the daughter of sharecroppers and was raised in Harlem, New York City. She and her family were on welfare. Gibson had trouble in school. She ran away from home quite frequently. She excelled in horsemanship but also competed in golf, basketball, and paddle tennis. Her talent for and love of paddle tennis led her to win tournaments sponsored by the Police Athletic League and the New York City Department of Parks and Recreation. Musician Buddy Walker noticed her playing ping-pong and introduced her to tennis at the Harlem River Tennis Courts. Dr. Walter Johnson, a Lynchburg, Virginia, physician who was active in the black tennis community, helped with her training.

With the assistance of a sponsor, Gibson moved to Wilmington, North Carolina in 1946 for tennis training, and in 1947 at the age of 20, she won the first of 10 consecutive national championships run by the American Tennis Association, the then-governing body for black tournaments.

Forced to play in what was basically a segregated sport, at age 23 Gibson was finally given the opportunity to participate in the 1950 US Championships after Alice Marble had written an editorial for the July 1, 1950, edition of American Lawn Tennis Magazine. Marble said, "Miss Gibson is over a very cunningly wrought barrel, and I can only hope to loosen a few of its staves with one lone opinion. If tennis is a game for ladies and gentlemen, it's also time we acted a little more like gentlepeople and less like sanctimonious hypocrites.... If Althea Gibson represents a challenge to the present crop of women players, it's only fair that they should meet that challenge on the courts."

Marble said that if Gibson were not given the opportunity to compete, "then there is an uneradicable mark against a game to which I have devoted most of my life, and I would be bitterly ashamed."

Gibson continued to improve her tennis game while pursuing an education. In 1953, she graduated from Florida A&M University on a tennis and basketball scholarship and moved to Jefferson City, Missouri to work as an athletic instructor at Lincoln University.

Gibson was now able to compete against the best players from around the world because the color barrier had been broken. Gibson's game improved to where she won the 1955 Italian Championships. The following year, she won her first Grand Slam titles, capturing the French Championships in singles and in doubles with her partner, Jewish Englishwoman Angela Buxton.

Buxton had run into discrimination from other players and the tennis establishment along the same lines as those experienced by Gibson, so the two joined forces and achieved great success. Buxton was the first Jewish champion at Wimbledon, and Gibson was the first champion of African descent. An English newspaper reported their victory at Wimbledon under the headline "Minorities Win."

She followed up by becoming the first black person to win a title at Wimbledon, again capturing the doubles title with Buxton. At the US Championships that year, she reached the singles final where she lost to Shirley Fry Irvin.

In 1957, Gibson lost in the singles final of the Australian Championships, again to Irvin. The two women, however, teamed to capture the doubles title, as Buxton had retired prematurely at the age of 22 due to a serious hand injury.

At Wimbledon, Gibson won her first of two consecutive singles championships and, upon returning to the United States, was given a ticker-tape parade in New York City and an official welcome at New York City Hall. She responded by winning the US Championships. For her accomplishments that year, Gibson earned the No. 1 ranking in the world and was named the Associated Press Female Athlete of the Year.

In 1958, after successfully defending her Wimbledon singles title and winning her third consecutive Wimbledon women's doubles title, Gibson again won the singles title at the US Championships. She was named the Associated Press Female Athlete of the Year for the second consecutive year. That year, Gibson retired from amateur tennis.

Before the open era began, there was no prize money, other than an expense allowance, and no endorsement deals. To begin earning prize money, tennis players had to give up their amateur status. As there was no professional tour for women, Gibson was limited to playing in a series of exhibition tours.

In retirement, Gibson wrote her autobiography and in 1959 recorded an album, Althea Gibson Sings, as well as appearing in the motion picture, The Horse Soldiers. In 1964, she became the first African-American woman to play in the Ladies Professional Golf Association. However, she was too old to be successful and only played for a few years.

In 1971, Gibson was inducted into the International Tennis Hall of Fame, and in 1975, she was appointed the New Jersey state commissioner of athletics. After 10 years on the job, she went on to work in other public service positions, including serving on the governor's council on physical fitness.

Tennis players made no money in the ‘50s, and Gibson’s finances worsened over the years. In 1992, she suffered a stroke. A few years later, Gibson called Buxton and told her she was on the brink of suicide. Gibson was living on welfare, and unable to pay for rent or medication. Buxton arranged for a letter to appear in a tennis magazine. Buxton told Gibson nothing about the letter, but Gibson figured it out when her mailbox started to bulge with envelopes full of checks from around the world. Eventually nearly $1 million came in.

The title of her autobiography, written in 1958, is "I Always Wanted to Be Somebody." To tennis fans, she always will be somebody very special. Though she didn't go looking for the role of pioneer, she was one. "If it hadn't been for her," says Billie Jean King, winner of 12 Grand Slam singles titles, "it wouldn't have been so easy for Arthur (Ashe) or the ones who followed."

In 2003, at the age of 76, Gibson died in East Orange, New Jersey due to respiratory failure.

In August 2007, on the opening night of the US Open, the 50th anniversary of Gibson's victory at the US National Championships in 1957, Gibson was inducted into US Open Court of Champions. (info from Wikipedia & AltheaGibson.com. Photo from AltheaGibson.com)
Posted by Michael N. Marcus at 5:44 AM