Maybe not the first time, but a good story 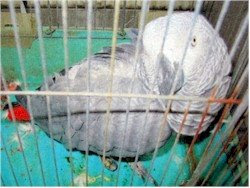 When a parrot named Yosuke flew out of his cage and got lost, he did exactly what he had been taught - recite his name and address to a stranger willing to help.

Police rescued the African grey parrot two weeks ago from a neighbor's roof in Nagareyama, near Tokyo, Japan. After spending a night at the police station, he was transferred to a veterinary hospital while police tried to identify his owner.

Yosuke had been silent with the cops, but began chatting after a few days with the vet.

The Nakamura family told police they had been teaching the bird its name and address for about two years.

But Yosuke apparently wasn't happy about talking to police. "I tried to be friendly and talked to him, but he completely ignored me," officer Shinjiro Uemura said. (info & photo from The Associated Press)
Posted by Michael N. Marcus at 4:45 AM

I have a 6-year old son who can't remember his address.

I agree with you about these. Well someday Ill create a blog to compete you! lolz.