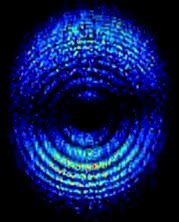 Earlier this year, scientists filmed an electron in motion for the first time, using a new technique that will allow researchers to study the tiny particle's movements directly.

Previously it was impossible to photograph electrons because of their extreme speed, so scientists had to rely on more indirect methods. These methods could only measure the effect of an electron's movement, whereas the new technique can capture the entire event.

Extremely short flashes of light are necessary to capture an electron in motion. A technology developed within the last few years can generate short pulses of intense laser light, called attosecond pulses, to get the job done.

Using another laser, scientists can guide the motion of the electron to capture a collision between an electron and an atom on film.

The length of the film Mauritsson and his colleagues made corresponds to a single oscillation of a wave of light. The speed of the event has been slowed down for human eyes. The results are detailed in the journal Physical Review Letters.

Mauritsson says the technique could also be used to study what happens in an atom when an electron leaves its shell. (info from MSNBC)
Posted by Michael N. Marcus at 5:29 AM