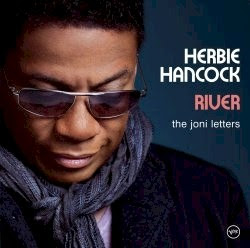 Last night Herbie Hancock, not some country twanger or rapper, won the Grammy award in the album of the year category for his tribute to Joni Mitchell, “River: The Joni Letters,” which featured artists including Corinne Bailey Rae and Norah Jones offering gentle renditions of Mitchell’s songs. The album’s unexpected victory represents the first time in 43 years that a jazz album has won the album of the year prize.

“What a beautiful day this is in Los Angeles!” Hancock, a favorite of the National Academy of Recording Arts and Sciences who had won 10 Grammy trophies before Sunday, said as he took the stage.

Though the choice of Hancock may stoke criticism that Grammy voters are out of step with pop music’s cutting edge, the decision was defended backstage. Vince Gill, the country superstar who lost out to Hancock in the album of the year field, said Hancock was “hands-down a better musician than all of us put together.”

Neil Portnow, the president of the academy, which bestows the awards, disputed characterizations of Hancock as irrelevant, saying the competition is based on excellence, not sales. (info from The New York Times)
Posted by Michael N. Marcus at 5:15 AM