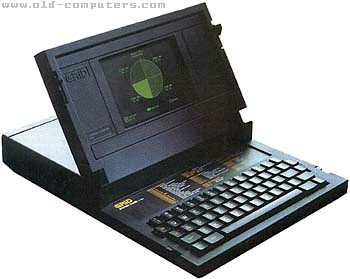 Designed in 1979 by William Moggridge, for British company Grid Systems, the Grid Compass was one fifth the weight of any model equivalent in performance and was used by NASA on the space shuttle program in the early 1980's.

It was the first computer from Grid, and the very first "clamshell" laptop. It was an expensive business computer with large RAM and data storage memories for its time, and one of the first plasma screens that displayed graphics.

It used a magnesium case that provided protection and acted as a heat-sink, so there was no cooling fan. Stangely, there was no carrying handle. Instead of a disk drive, Compass had a 384 KB non-volatile bubble memory. Software could be loaded from a Grid server, or an external floppy or hard disk drive. It had a built-in modem.

In addition to being first laptop to go into space, it was also used aboard naval vessels, and was carried by paratroopers dropped behind enemy lines to monitor troop and equipment movements and to send back data to the command center.

Grid was way ahead of everyone else, and they felt they could sit back and do nothing. By the time they realized they needed to improve, they couldn't catch up with competitors.

When Grid went out of business they sold technology to Radio Shack for use in Tandy TRS-80 computers. Later Tandy lawyers noticed they had purchased the patent on clamshell computers and notified all the laptop makers that they would begin collecting royalties. After a legal battle, the patent was upheld and a small portion of the price of every clamshell laptop sold by anybody went to Tandy! Apparently Grid had never enforced their patent, so other makers produced similar designs for many years before Tandy started making royalty claims. By then the clamshell design was firmly entrenched and companies had to pay or get out of the laptop business. (info from About.com and old-computers.com, photo from old-computers.com)
Posted by Michael N. Marcus at 4:23 AM

As a GRiD employee for most of its history, I do want to thank you for the recap of our beloved company, but do want to take issue with one statement.

We did not sit back and do nothing. Our problem was of scaling. We were a small start up company that was competing in the portable computer market with the likes of Toshiba and IBM. The market was willing to settle for these inferior machines quite simply due to cost and we did not have the economies of scale to compete.

And while we were doing nothing, we (mostly Jeff Hawkins and his team of wizards), helped develop the first pen based palm computers. Many of the original founders of Palm were former GRiD employees. We were unable to make a market for this new technology for two reasons - Tandy management could not figure out how to sell them in a Radio Shack and Apple's disastrous over-hyping the nascent market with its goofy Newton.

BTW, if you want to see a GRiD, the Smithsonian Air and Space museum has a GRiD on display in their Computers in Space section.