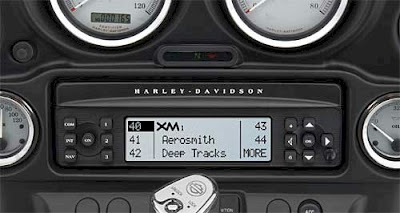 XM Satellite Radio entered the motorcycle market with Harley-Davidson’s 2006 Screamin’ Eagle Ultra Classic Electra Glide (FLHTCUSE model), the first motorcycle ever equipped with a standard satellite radio. The XM-equipped Harley made its debut at the annual Sturgis Rally in South Dakota in August 2005, where 800,000 motorcycle enthusiasts converge every summer.

Since that time, Harley has offered XM on other models, and Kawasaki announced optional XM on their Vulcan 1600 Nomad touring bike. Sirius apparently is not a factory option on any motorcycles, but you can get it in a Winnebago or Aston-Marton.