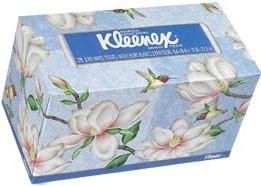 Kimberly, Clark and Co. was founded in 1872 by John A. Kimberly, Havilah Babcock, Charles B. Clark, and Frank C. Shattuck in Neenah, Wisconsin with $30,000 capitalization. Their first business was running paper mills.

Kleenex, the first throwaway handkerchief, followed in 1924, originally marketed to remove cold cream. A few years after the introduction of Kleenex, the company began receiving a large number of letters from customers suggesting its use for colds and hay fever. By the 1930s, Kleenex was being marketed with the slogan “Don’t Carry a Cold in Your Pocket” and its utilization as a disposable handkerchief replacement became important.

The popularity of the product has led to the use of its name to refer to any facial tissue, regardless of the brand. (info from Wikipedia)
Posted by Michael N. Marcus at 5:04 AM