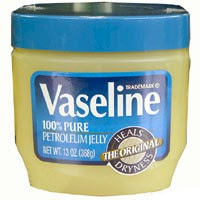 The raw material for petroleum jelly (also known as petrolatum or soft paraffin) was discovered in 1859 in Titusville, Pennsylvania where it was stuck to some of the first oil rigs in the US. Oil workers disliked the goo because it caused oil rigs to jam, but they used it on cuts and burns because it hastened healing.

Robert Chesebrough, a young chemist whose previous work of distilling fuel from the oil of sperm whales had been rendered obsolete by petroleum, went to Titusville to see what new materials had commercial potential. Chesebrough took the unrefined black "rod wax", as the drillers called it, back to his laboratory to refine it and explore potential uses. In 1865, Chesebrough discovered that by distilling the lighter, thinner oil products from the rod wax, he could create a light-colored gel.

By 1870, Chesebrough was marketing his petroleum jelly product as Vaseline (claimed to be from the German word for water (wasser -- pronounced vahser), and the Greek word for oil (elaion), but this is unconfirmed). He patented the process in 1872.

Chesebrough traveled around New York State demonstrating the product to encourage sales by burning his skin with acid or an open flame, then spreading the ointment on his injuries and showing his past injuries healed, he claimed, by his miracle product. He opened his first factory in 1870 in Brooklyn, and within ten years, the product's increased exposure and popularity meant that almost every household in America had a jar of Vaseline.

Chesebrough expanded his business to Canada, the United Kingdom and British colonies around the world. New mothers used it as an absorbent shield for diaper rash. People working in extreme cold weather used it to relieve dry chapped skin. Commander Robert Peary took Vaseline with him when he became (as is generally accepted) the first man to reach the North Pole, because it wouldn't freeze.

By the late 1880s, Chesebrough was selling Vaseline nationwide at the rate of one jar per minute, and most medical professionals recognized Vaseline as the standard remedy for skin complaints.

By 1911, the company began opening operation plants and factories in Europe, Canada, and Africa in order to facilitate the manufacture and distribution of the product.

During the First World War, Vaseline had been used by US soldiers for cuts and bruises and to prevent sunburn. And many medical officers carried tubes of Vaseline® with them to treat minor cuts or burns. During the Second World War, Vaseline was commissioned to produce a sterile antiseptic wound dressing containing petroleum jelly.

In 1955, Chesebrough Manufacturing Co. merged with Pond's Extract Company (known for Pond’s cold cream) to form Chesebrough-Ponds, Inc. During the 1960s, the company continued to expand to locales such as Argentina, Australia, Brazil, and India.
1970 brought with it Vaseline®'s 100th Anniversary, and to mark the occasion, a major new product, Vaseline® Intensive Care Lotion. The brand was later extended to include hand and nail moisturizers and deodorants for men and women.

In 1987, Chesebrough-Ponds was purchased by consumer products giant Unilever, which began as soap maker Lever Bros. in the 1890s.

Chesebrough originally promoted Vaseline primarily as an ointment for scrapes, burns, and cuts, but physicians have shown that Vaseline has no medicinal effect or any effect on the blistering process, nor is it absorbed by the skin. Vaseline’s effectiveness in accelerating wound healing stems from its sealing effect on cuts and burns, which inhibits germs from getting into the wound and keeps the injured area supple by preventing the skin's moisture from evaporating.

However, after becoming a medicine chest staple, consumers began to use Vaseline for a myriad of ailments and cosmetic uses including chapped hands or lips, toenail fungus, nosebleeds, diaper rash, chest colds, and even to remove makeup or stains from furniture.

It is even used as trout bait.

There are uses for it for pets including stopping fungi from developing on aquatic turtles' shells and to keep cats from making messes when they cough up furballs.

In the early 20th century, petroleum jelly, either pure or as an ingredient, was popular as a hair pomade. When used in a 50/50 mixture with pure beeswax, it makes an effective mustache wax.

Petroleum jelly was formerly used to help pitch a spitball in baseball. Although the pitch was banned in 1920, pitchers sometimes throw "the spitter" surreptitiously.

It can also be used as tinder when coated on cotton balls. The combination can easily be ignited by a fire starter, burning hot and long, and the petroleum keeps the cotton from getting wet. Petroleum jelly is a useful addition to a survival kit: cotton balls saturated with petroleum jelly, packed into a plastic 35mm film canister make excellent fire-starters, taking a spark readily and burning fiercely for several minutes.

It can be used as a quick method of shining shoes, when spread evenly onto the surface to create a shiny layer.

Petroleum jelly is commonly used as a sex lubricant. (Not recommended)

* It should not be used on fresh burns of any kind, including sunburn. It traps heat inside, worsening burns. After heat has dissipated, it can serve as a dressing for minor burns to soothe pain.

* Nasal congestion or dryness. It may immobilize the cilia in the nose, impeding its ability to clean incoming air. If small particles are inhaled, they may deposit in the lungs and lead to a form of pneumonia.

* Sex with latex condoms. Petroleum weakens latex, increasing the chance of rupture, and the chance of pregnancy, or spreading infections such as HIV.

(Info from Wikipedia and Unilever)
Posted by Michael N. Marcus at 5:18 AM