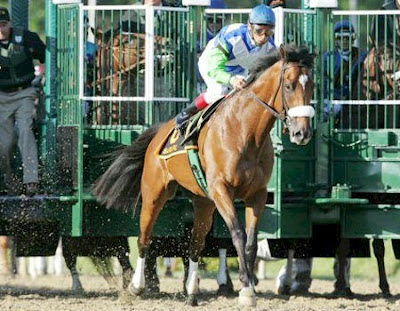 Angry demonstrators and rabbis as well as a ban on gambling failed to stop the opening of Israel's first horse racetrack, as thousands of fans cheered the four-legged competitors in October, 2006.

It was just a collection of collapsible tents with a makeshift grandstand in the middle of a field in northern Israel -- but as the horses turned the final corner before the finish line on Wednesday, it looked, sounded and smelled like the real thing. That's what bothers the detractors.

A few animal rights activists broke onto the track, charging that race horses are abused, and were dragged off by police. Five were arrested. One of Israel's chief rabbis condemned the event as frivolous. And a large sign overlooking the new track reminded spectators that horse race gambling is illegal in Israel.

Even so, organizers of the event and investors called the turnout a success and said they it demonstrated the need to legalize gambling and build up a permanent horse racing industry.

"The fact that people are running here into the stadium, it testifies that it's a need and that they want to support it and they want it to happen," said Danny Atar, head of the Gilboa Regional Council, who is leading the push to have the sport legitimized.

The debate over horse racing dates to 2004, when Israel's parliament passed a law allowing construction of race tracks. Animal rights activists with a group called "Hakol Chai" filed an appeal with the Israeli Supreme Court against the law.

The opponents gained a key ally when Rabbi Shlomo Amar issued a religious ruling against horse racing, calling it frivolous activity and noting its association with gambling and allegations of cruelty to animals. Some experts dispute the cruelty charge, claiming that the valuable race horses are among the best kept animals in the world.

Just as the ban on gambling does not deter Israelis from placing millions of dollars in bets on Internet gambling sites and illegal casinos in Israel, gambling was part of the horse race. Fans said they knew of bets placed in secret among groups and friends.

"Gambling is the main starter and the main economic way to make the race track succeed," said Atar, who said he did not know that illegal gambling was taking place. He hoped that in three to four months the Israeli government would approve horse race gambling.

Israeli businessman Ronen Kristal, who invested the first $700,000 in the track, said other investors are waiting for gambling to become legal. He said it would cost about $14 million to finish the project, which is expected to create about 3,500 jobs. (info from The Associated Press & Reuters, photo from Reuters)
Posted by Michael N. Marcus at 5:15 AM