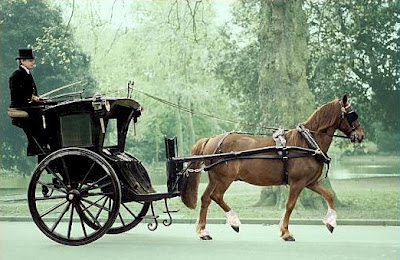 A Hansom cab is a type of horse-drawn carriage first designed and patented in 1834 by English architect Joseph Hansom. Originally known as the Hansom Safety Cab, its purpose was to combine speed with safety, with a low center of gravity for safe cornering.

Cab is a shortening of cabriolet, reflecting the design of the carriage. It replaced the hackney carriage as a vehicle for hire. With the introduction of mechanical taximeters to measure fares, the name became taxicab.

Hansom cabs enjoyed immense popularity as they were fast, light enough to be pulled by a single horse, (making the journey cheaper than travelling in a larger four-wheel coach) and were agile enough to steer around horse-drawn vehicles in the notorious traffic jams of nineteenth-century London. They were always seen as rather 'racy' and were not used by respectable ladies on their own.

The cab sat two passengers (three if squeezed in) and a driver who sat on a sprung seat behind the vehicle, and used a long whip to rech the horse over the roof of the cab. Passengers gave instructions to the driver through a trap door near the rear of the roof. They could also pay the driver through this hatch and he would then operate a lever to release the doors so they could get out.

The passengers were protected from the elements by the cab itself, as well as by folding wooden doors which enclosed their feet and legs, protecting clothes from splashing mud. Later versions also had a glass window above the doors to complete the enclosure. A curved fender mounted forward of the doors protected passengers from the stones thrown up by the flying hooves of the horse.

There were up to 3000 Hansom Cabs in use at the height of their popularity and they quickly spread to other cities in the United Kingdom, as well as continental European cities. The cab was introduced to the United States during the late 19th century, and was most commonly used in New York City. They were also used in Sydney, Cairo, and Hong Kong.

The cab enjoyed popularity in the United Kingdom until the 1920's, when cheap automobile transport and the construction of reliable mass-transport systems led to a decline in usage. The last license for a horse-drawn cab in London was issued in 1947. (info from Wikipedia) (photo from Haydn Webb Carriages)
Posted by Michael N. Marcus at 4:27 AM