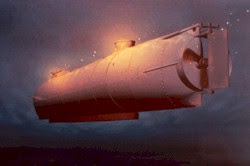 Horace Lawson Hunley (1823 - 1863), was a Confederate marine engineer during the American Civil War. He developed early, hand-powered submarines, the most famous of which was named for him, H. L. Hunley.

Although he was born in Tennessee, his family eventually relocated to New Orleans. He served in the Louisiana State Legislature and became a famous lawyer in New Orleans. In 1861, after the start of the War, Hunley joined James R. McClintock and Baxter Watson in building the submarine Pioneer. The Pioneer was promising, but in order to prevent capture by the Union, it had to be scuttled when New Orleans fell to Union forces.

After an unsuccessful attempt at another submarine with McClintock and Watson which ended in the vessel's sinking in Mobile Bay, Alabama, Hunley personally funded a third sub named in his honor: H. L. Hunley.

Five men from the first crew died during early tests of the human-powered vessel, when open hatches were flooded by the wake of a passing ship; four men managed to escape. A second crew was assembled in Charleston Harbor. The harbor was blockaded by Yankee ships that stopped deliveries of needed goods to the city.

On October 15, 1863, though he was not really part of the second crew, Hunley decided to take control as captain during a routine exercise. But the vessel again sank, and this time all eight crewmembers were killed, including Hunley himself.

After the failure of the second crew, the Hunley submarine was again recovered and with a third crew, became the first submarine in the history of naval warfare to attack and sink a ship (USS Housatonic).

The Hunley silently approached the Housatonic on the night of February 17, 1864. By the time crewmen aboard Housatonic determined that the Hunley was not a log, porpoise, or other harmless object, the submarine closed the gap and the Union vessel's heavy guns could not be aimed low enough to defend itself.

As the Housatonic's crew slipped the anchor chain and backed the engine in an attempt to avert the attack, H.L. Hunley rammed an explosive charge into the Housatonic's starboard side. Within moments, the charge exploded; five minutes later, Housatonic lay completely submerged. As the Union blockader slipped beneath the waves, five of its crewmen perished, either as a result of the blast or by drowning. The remainder of its crew scrambled to the relative safety of the vessel's rigging.

The Hunley sank for the third time shortly after the Housatonic attack and was lost for more than 130 years until it was recovered in the early 2000s. The final crew was reburied in April 2004. (Info from History Channel, US Navy, Wikipedia) (Picture from Hunley.org)
Posted by Michael N. Marcus at 3:58 AM