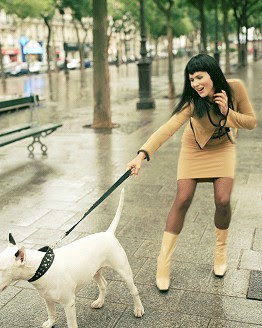 While women’s hemlines have gone up and down through history, the invention of what we know as the miniskirt is generally credited to British fashion designer Mary Quant in the mid-1960s. Quant was inspired by the Mini automobile. French designer André Courrèges is also often cited as its inventor, and some give the credit to Helen Rose who made some miniskirts for actress Anne Francis in the 1956 science fiction movie, Forbidden Planet. There is also a claim that designer John Bates was responsible for the miniskirt. Bates designed costumes for Diana Rigg, who acted as as Emma Peel in the TV show, The Avengers, and helped define "Mod" style.

Mary Quant ran a popular clothes shop in London called Bazaar, where she sold her own designs. In the late 1950s she began experimenting with shorter skirts, which resulted in the miniskirt in 1965, one of the defining fashions of the decade. Due to Quant's position in the heart of fashionable "Swinging London", the miniskirt was able to spread beyond a simple street fashion into a major international trend.

Minis were popularized by skinny models Twiggy and Jean Shrimpton; and even the Queen of England caught a little of the mood, sporting a noticeably shorter hemline at the royal garden party one year.

Shrimpton wore a short white shift dress made by Colin Rolfe in 1965 at the Melbourne Cup Carnival in Australia, where it caused a sensation. Shrimpton claimed that the brevity of the skirt was due mainly to Rolfe running out of fabric, and that the controversy was also caused by her not wearing a hat and gloves, vital accessories in the conservative environment.

The miniskirt was further popularized by André Courrèges, who developed it separately and incorporated it into his Mod look, for spring/summer 1965. His miniskirts were less body-hugging, and worn with the white "Courrèges boots" that became a trademark. By introducing the miniskirt into the haute couture of the fashion industry, Courrèges gave it a greater degree of respectability than might otherwise have been expected of a street fashion.

The miniskirt was followed up in the late 1960s by the even shorter micro skirt. (info from Wikipedia and other sources)
Posted by Michael N. Marcus at 4:49 AM