1868:
first department store in the US 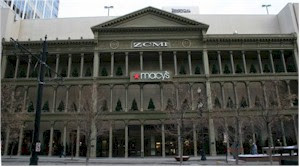 Zion's Co-operative Mercantile Institution or ZCMI was founded in 1868 and may have been the first department store in the United States. R.H. Macy & Co. started earlier, but did not become a department store until 1877.

Based in Salt Lake City, Utah, ZCMI quickly became a household name in the community. The (Mormon) Church of Jesus Christ of Latter-day Saints was a significant influence in the company, retaining a majority interest in ZCMI until its eventual sale.

In December 1999, as a result of losses for two consecutive years along with mounting economic and social pressures, ZCMI was sold to the May Department Stores Company. ZCMI operated under its original name as a part of May's Oregon-based Meier & Frank division until April 2002, when the stores adopted the Meier & Frank name.

In addition to the name change, the stores in Logan, St. George, Idaho Falls, and Pocatello were sold to Dillard's. By August 2002, the stores were further consolidated within May into the company's Los Angeles division, Robinsons-May, though retaining the Meier & Frank nameplate. May Department Stores was acquired by Federated Department Stores in September 2005, with most stores converted to Macy's by the end of 2006. In 2007, Federated anniounced that it was changing its corporate name to Macy's.
Posted by Michael N. Marcus at 4:50 AM