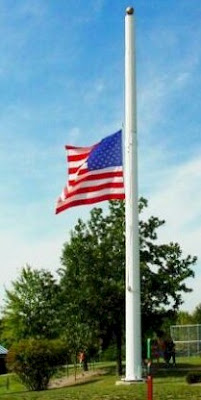 Most US military personnel who die on duty return to the United States via Dover Air Force base in Delaware.

In 1991, at the time of the Persian Gulf War, President George H.W. Bush banned media coverage of the returns.

But critics argued the government was trying to hide the human cost of war. President Barack Obama had asked for a review of the ban, and Defense Secretary Robert Gates has said that the blanket restriction made him uncomfortable.

The Pentagon's 18-year ban on media coverage ended with the return to the US of the remains of Staff Sgt. Phillip Myers of Hopewell, Virginia.

After receiving permission from family members, the military opened Dover Air Force Base in Delaware to the media Sunday night for the return of the body of Air Force

The 30-year-old airman was killed April 4 in Afghanistan, when he was hit with an improvised explosive device.

Myers' family was the first to be asked under a new Pentagon policy whether it wished to have media coverage of the arrival of a loved one at the Dover base. The family agreed, but declined to be interviewed or photographed.

An eight-member team wearing white gloves and battle fatigues carried Myers' body off of a military contract Boeing 747 that touched down after a flight from Germany.

Myers' widow and other family members, along with about two dozen members of the media, attended the solemn ceremony, which took about 20 minutes. There was a brief prayer ceremony on the plane before an automatic loader slowly lowered the flag-draped transfer case bearing Myers' body to the ground, where the eight-member team slowly carried it to a truck.

Preceded by a security vehicle with flashing blue and red lights, the truck then slowly made its way to the base mortuary, where Myers' body was to be processed for return to his family.

Myers was a member of the 48th Civil Engineer Squadron with the Royal Air Force in Lakenheath, England, one of the bases the US Air Force uses in the UK. He was awarded a Bronze Star for bravery last year in recognition of his efforts in support of Operation Iraqi Freedom.

Myers' widow flew from England to attend the arrival of his body to the US. Under the new policy, families of fallen servicemen will decide whether to allow media coverage of their return. If several bodies arrive on the same flight, news coverage will be allowed only for those whose families have given permission.

There have been some exceptions since 1991, most notably in 1996 when President Bill Clinton attended the arrival of the remains of Commerce Secretary Ron Brown and 32 others killed in a plane crash in Croatia. In 2000, the Pentagon distributed photographs of the arrival of remains of those killed in the bombing of the USS Cole and in 2001, the Air Force distributed a photograph of the remains of a victim of the Sept. 11 attack on the Pentagon.

One objection to lifting the ban had been that if the media were present, some families might feel obligated to come to Dover for the brief, solemn ritual in which honor guards carry the caskets off a plane.

Few families now choose to attend, in part because doing so means leaving home and the support system of friends at a difficult time. The sudden trip can also be expensive and logistically difficult, though the military provides transportation for up to three members to greet their service members at Dover. (info from the Associated Press, photo from Salem-News.com)
Posted by Michael N. Marcus at 4:14 AM