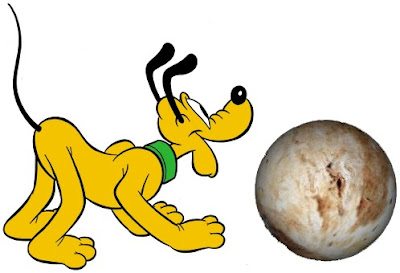 Pluto was stripped of its status as a planet and will now be classified as a "plutoid" -- a new category of celestial body. It has taken nearly two years of arguing and negotiations, but astronomers have finally settled on a new way to refer to the former ninth planet.

In the revised naming system, all small and nearly spherical objects orbiting beyond Neptune, which is now the most distant planet from the sun, will fall under the new label.

The change was decided by a committee of the International Astronomical Union, which in 2006 took the controversial decision to demote Pluto from planet into a sub-class called dwarf-planets. The move sparked world-wide furor and many scientists opposed the idea of abandoning a planet that been a feature of the Solar System for about 70 years.

Teachers and text book writers were also left with the task of drastically revising the view the solar system. Dr. Robert Massey of the Royal Astronomical Society in England, said: "School books are going to have to be rewritten again after this change. "From a scientific point of view, it makes sense to bring a more consistent approach to the way we classify objects in the Solar System."

The International Astronomical Union's Executive Committee approved the new Plutoid classification at a meeting in Oslo, Norway this week. They said that they expected more plutoids to be named as new objects are discovered orbiting around the sun.

There are now two known plutoids -- Pluto and Eris, a 1,500-mile-wide sphere of rock spotted orbiting beyond Pluto in an icy region known as the Kuiper Belt in 2003. Eris has since been found to be bigger and heavier than its famous neighbor.

The International Astronomical Union said: "Plutoids are celestial bodies in orbit around the sun at a distance greater than that of Neptune that have sufficient mass for their self-gravity to overcome rigid body forces to that they assume a near spherical shape, and that have not cleared the neighborhood around their orbit."

Astronomers now hope that the decision to classify Pluto as a plutoid will put an end to the debate. British astronomer Sir Martin Rees said, "The reclassification reflects that Pluto is part of a newly recognized and growing number of objects in the solar system."

The International Astronomical Union has been responsible for naming planetary bodies and their satellites since the early 1900s.

But Alan Stern, a former NASA space sciences chief and principal investigator on a mission to Pluto, was scathing in his condemnation of the decision. He said: "It's just some people in a smoke-filled room who dreamed it up. Plutoids or hemorrhoids, whatever they call it. This is irrelevant." (info from Telegraph Media Group)
Posted by Michael N. Marcus at 5:50 AM

Astronomers have not settled on anything regarding Pluto, and no textPluto is still a planet. Only four percent of the IAU voted on the controversial demotion, and most are not planetary scientists. Their decision was immediately opposed in a formal petition by hundreds of professional astronomers led by Dr. Alan Stern, Principal Investigator of NASA’s New Horizons mission to Pluto. One reason the IAU definition makes no sense is it says dwarf planets are not planets at all! That is like saying a grizzly bear is not a bear, and it is inconsistent with the use of the term “dwarf” in astronomy, where dwarf stars are still stars, and dwarf galaxies are still galaxies. Also, the IAU definition classifies objects solely by where they are while ignoring what they are. If Earth were in Pluto’s orbit, according to the IAU definition, it would not be a planet either. A definition that takes the same object and makes it a planet in one location and not a planet in another is essentially useless. Pluto is a planet because it is spherical, meaning it is large enough to be pulled into a round shape by its own gravity--a state known as hydrostatic equilibrium and characteristic of planets, not of shapeless asteroids held together by chemical bonds. These reasons are why many astronomers, lay people, and educators are either ignoring the demotion entirely or working to get it overturned. books need be rewritten.