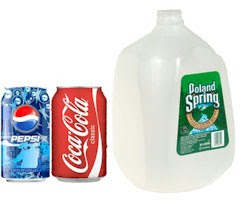 The next generation may not be the Pepsi generation — or the Coke generation, for that matter.

For years, soda has been the quintessential American drink, considered the perfect thirst quencher, morning pick-me-up or accompaniment to lunch or supper.

But that is slowly changing.

As Americans look for greater variety in their drinks and strive for healthier diets, consumption of soda — with its 250 calories and 67 grams of sugar in a 20-ounce bottle — is slipping.

Data released by Beverage Digest, the industry trade publication, shows that for the first time in 20 years, the number of cases of soda sold in the United States declined. Case volume in 2005 was down 0.7 percent, to 10.2 billion cases.

Coke's flagship brand, Coca-Cola Classic, was down 2 percent, and original Pepsi from PepsiCo was down 3.2 percent.

In recent years, soda has come under increasing fire from critics who see it as little more than liquid candy and blame it for contributing to America's looming problem of childhood obesity. Results of a study link soda to weight gain among teenagers.

While soft drinks are still the country's most heavily consumed beverage, the category is losing ground to bottled water, sports drinks like Gatorade and Powerade and energy drinks like Red Bull and Full Throttle.

Even diet sodas, once a booming category, have slacked off. Diet Pepsi's case volume was down by 1.9 percent in 2005 and Diet Coke's was virtually unchanged, up only 0.1 percent, according to Beverage Digest.

In 2001, Pepsi bought the South Beach Beverage Company, adding energy drinks and teas to its product lineup, and Quaker Oats, which owns Gatorade and a variety of food brands. As a result, Pepsi's percentage of total revenue coming from carbonated soft drinks is considerably less than Coca-Cola's. Coke, on the other hand, continued to promote carbonated soft drinks. The company says it believes that, despite the recent industry downturn, its carbonated soft drink business can still grow in the United States. In recent remarks to investors, Coke's chief executive, E. Neville Isdell, emphasized the current growth of Coke's flagship soda brand in markets like China and Russia.

Coke has, however, also diversified into drinks like bottled water, energy drinks, sports drinks, tea and refrigerated juices, but it is not the market leader in any of these areas and, in several cases, the company was a latecomer in the market.

John Faucher, an analyst at J. P. Morgan Chase, said that soda's declining popularity was not just because of changing health trends and attempts to cut calories, but also because of wandering taste buds. "A lot of this is about variety," he said. "Consumers want new exciting beverages."

While bottled water is an indisputably healthy beverage choice, the same cannot be said of the thriving energy drink category, which has as many calories and sugar grams as soda, and an extra dose of caffeine.

Some consumers do, however, consider sports drinks to be healthier, though opinions are mixed. Pepsi includes Gatorade in its collection of healthier product and awards it a green "Smart Spot" logo. Gatorade and Powerade both have half the sugar and calories as soda.

But Dr. David Ludwig, director of the obesity program at Children's Hospital Boston, said that if consumers were drinking large amounts of sports drinks because they considered them healthier, they could wind up consuming the same number of calories. "For anything except marathon-type activity, the body's need for water can be satisfied by water," Dr. Ludwig said.

Dr. Ludwig is one of the authors of a study published in the journal Pediatrics showing a direct correlation between the consumption of soda and other sweetened beverages and weight gain in teenagers. The study was of 100 teenagers, ages 13 to 18, each of whom had been previously consuming roughly 350 calories of sweetened beverages a day. (info from The New York Times)
Posted by Michael N. Marcus at 7:29 AM