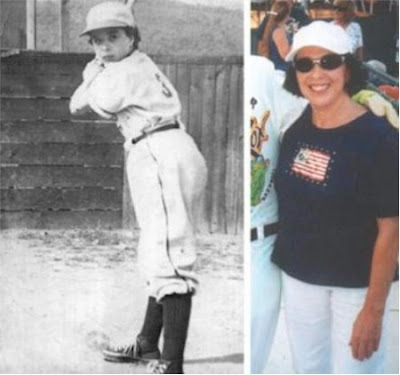 During the summer of 1950, as first baseman Tubby Johnston, with short hair tucked under her cap, 12-year-old Kathryn Massar and her brother Tommy tried out for the Kings Dairy Little League team in Corning, NY.

"They didn't know I was a girl, and my brother didn't say anything," she said. "If I had told them my real name, they wouldn't have let me play. So I told them my name was Tubby, from the male character in the cartoon strip Little Lulu.

"I played a couple of weeks and then I talked to my coach." I said: "I really need to tell you something. I'm not a boy. I'm a girl." He said, 'That's O.K., you're a darned good player.' So I ended up playing the whole season at first base and became sort of a drawing card, because everybody wanted to see a girl play."

Because of her age, Massar's Little League career ended after that season. But her participation produced the Tubby Rule prohibiting girls from playing in Little League. It wasn't changed until 1974.

Massar's sports career did not end there, however. A coach from nearby Elmira spotted her talent and persuaded her to play for a girls' fast-pitch softball team. She also played softball and basketball in high school, in addition to tennis and swimming.

She forgot about her place in Little League history until 1974, when her twin sister phoned and told her about a 12-year-old who was credited with being the first girl in Little League.

"So I called Williamsport (where the Little League World Series is held) to just set the record straight and told them I had played 20 years earlier," she said. "I sent them clippings and a picture from The Corning Leader and they said, 'Well, it looks like you were the one.'"

Recognition still eluded her when the Little League decided to celebrate what it said was the 25th anniversary of the first girl to play in the sport. Once again, another name surfaced until a researcher, Lance Van Auken, discovered Kathryn's earlier letters in an old file cabinet in the league office.

Kathryn Massar has already had her honor certified in a new book about the history of Little League and also with an appearance on the television program I've Got a Secret. (info from The New York Times and Sports Illustrated.)
Posted by Michael N. Marcus at 3:03 AM