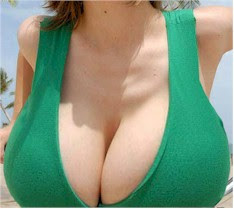 Known as breast augmentation, breast enlargement, mammoplasty enlargement, augmentation mammoplasty or boob job, a breast implant is a prosthesis used to enlarge the size of a woman's breasts. It's done for cosmetic reasons; to reconstruct the breast (e.g. after a mastectomy; or to correct genetic deformities), or as part of male-to-female sex reassignment surgery.

The earliest known implant was attempted by Austrian-German surgeon Vincenz Czerny, using a woman's own adipose tissue (from a benign growth, on her back).

In recent history, various creams and medications have been used in attempts to increase bust size. Doctors in 1945 and 1950 performed a flap-based augmentation by rotating the patient's chest wall tissue into the breast to add volume.

Various synthetics were used throughout the 1950s and 1960s, including silicone injections, which an estimated 50,000 women received.

Development of silicone granulomas (inflamed tumors) and hardening of the breasts were in some cases so severe that women needed to have mastectomies for treatment. Women sometimes seek medical treatment for complications up to 30 years after receiving this type of injection.
Posted by Michael N. Marcus at 5:12 AM