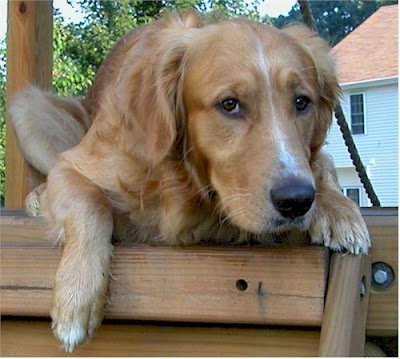 The Golden Retriever is one of the most popular family dogs; but Goldens did not help cavemen chase away their enemies, or help medieval shepards tend their flocks. The Golden history goes back just about 150 years.

During the nineteenth century, there was an ongoing quest among the British gentry for the perfect hunting dog, and many popular breeds have their roots in these efforts.

The origin of the Golden Retriever lies in the careful work of Sir Dudley Marjoribanks (later the first Lord Tweedmouth).

In 1865, Lord Tweedmouth purchased a yellow retriever "Nous" from an unregistered litter of otherwise black Wavy-Coated Retrievers. Nous was later bred with "Belle", a Tweed Water Spaniel, and the resulting litter produced four bitches that were instrumental to his breeding program. One of them, "Cowslip," was bred back to for over twenty years. Over the years, several outcrosses, to black Wavy Coated Retrievers, an Irish Setter, and later a sandy-colored Bloodhound occurred as he sought to improve and fix his new breed. The coat textures of the Goldens of this time reportedly varied, as did the color, which ranged from fox red to light cream.

The Kennel Club of England accepted the first Goldens for registration in 1903. At the time, they were registered as "Flat Coats -- Golden". By 1904 the first Golden placement at a field trial was recorded. In 1911, they were recognized as a separate breed, at first called "Yellow or Golden Retrievers," but within several years the "Yellow" was dropped from their name.

The first Golden in Canada seems to have been brought over by Hon. Archie Marjoribanks in 1881. The Canadian Kennel Club first recognized the breed in 1927. Goldens have been in the US since about 1890, with the earliest recorded dog being Hon. Archie Marjoribanks's "Lady" in 1894. The first AKC registered Golden was Robert Appleton's Lomberdale Blondin. There was no serious interest in them until about 1930 when Magoffin's import, CH Speedwell Pluto, captured widespread interest. The Golden Retriever was subsequently recognized by the AKC in 1932. At that time, they were a rare breed.

Dogs in general are pack-oriented animals, and need to interact with their pack on a regular basis to be secure. Goldens in particular have been bred through the years to make an excellent companion for people -- whether it is to sit quietly in a duck blind until it is time to retrieve, or as a service dog, or in any other capacity.

Because of this, they need to interact with their people. Although they enjoy the outdoors, even in cold and wet weather, they would rather sleep in a bed with humans, than in a dog house. Goldens are particularly forgiving dogs and will allow you to make many mistakes while still wanting nothing more than to please and be acknowledged for it with a scratch behind the ear. As a testament to their desire to please, the first three dogs to obtain Obedience Trial Championships were Golden Retrievers.

Because Goldens are such people-oriented dogs, it's important that they live WITH their owners. It is imperative that your Golden be regularly included in family activities. Once fully grown, they are a robust dog and will enjoy walking, hiking, jogging, hunting, swimming, fetching, traveling by car, etc. They have a strong irrepressable urge to retrieve. If no birds are falling from the sky, they will grab and clamp their strong jaws around shoes, underwear, pot-holders, socks, gloves, even Brillo soap pads. They are always ready and willing to eat, and are good climbers and jumpers. (Hunter, the dog in the picture above, has jumped onto a pool table, and climbed a five-foot ladder.)

As is common with the retriever breeds, Goldens are slow to fully mature both mentally and physically. At a year of age, they will have their full height, but their full weight will be another year or two in coming. Mentally, they remain puppies for a long time (up to two or three years of age) and many retain a very playful and clownish personality for most of their lives.

They seem to smile; and love to illicit smiles and laughs from people. Goldens are very affectionate, and will stand up to hug and lick family members, and even first-time visitors. Goldens will bark at strange people, vehicles and dogs; but if a burglar gets into your house, your Golden is more likely to play with him than to guard your family jewels. Goldens have great empathy, and know when people need cheering up; and can easily turn tears into laughs. Goldens love physical contact with people, including hand/paw shaking, hand/paw holding, hugging and rubbing.

Goldens do have a few disadvantages. Be prepared for clumps of golden fur all over your floor, golden hairs on dark clothing, and destroyed pot-holders. Goldens will eat anything within their reach (which includes the center of your dining table), and will sometimes retrieve disgusting things, and roll around in deer crap. (some info from K9web.com)
Posted by Michael N. Marcus at 2:48 AM