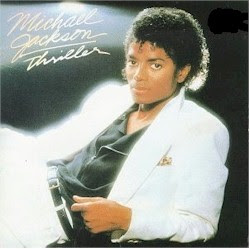 Michael Jackson's Thriller, released on December 1, 1982, is his most popular album, and made him an international star.

From the distance of a quarter-century, the release of Thriller looks like one of the most significant events in popular-music history. It is the record that ended commercial pop radio's de facto apartheid, that ushered in the modern music-video era, and that turned a former kiddie star into a new generation's equivalent of Elvis and the Beatles.

Thriller's huge sales may well represent the last great moment of pop consensus. At a time of intense musical fragmentation, it's intriguing to remember a record that seemed to capture everyone: blacks, whites, grade-schoolers, teens, college students, parents and grandparents.

According to Guinness World of Records, Thriller has worldwide sales over 104 million, making it by far the best selling album of all time. It's also notable for being one of only three albums to remain in the top 10 of the Billboard 200 for one full year, spending 80 consecutive weeks in the top 10, 37 of which were at number one.

In 2007, the National Association of Recording Merchandisers (NARM) and the Rock and Roll Hall of Fame ranked Thriller third on their "Definitive 200" list, a compilation of what they believed to be the greatest albums ever.

Thriller is also the first album of only three in history to produce seven Billboard top-ten singles, and the first and so far only album to be the best-selling album of two years (1983 and 1984) in the US. The album continues to sell an estimated 60,000 units in the US each year.

In February 1984, Jackson was nominated for twelve Grammy Awards — of which he won eight — breaking the record for the most Grammy Awards won in a single year. Seven were for Thriller and the other for the E.T. the Extra-Terrestrial storybook. The most important in terms of record sales was the Grammy for Album of the Year, which was awarded for Thriller. That same year, Jackson also won eight American Music Awards and the "Special Award of Merit" and three MTV Video Music Awards.

The New York Times called Jackson at age 25, a "musical phenomenon," further commenting that "in the world of pop music, there is Michael Jackson and there is everybody else." Time magazine explained that "the fallout from Thriller has given the [music] business its best years since the heady days of 1978, when it had an estimated total domestic revenue of $4.1 billion." Thriller also helped to bring music from African-American artists back into mainstream radio for the first time since the mid-1970s.

Thriller's milestone will officially be celebrated in February with a 25th anniversary edition of the album, featuring unreleased tracks, DVD goodies (including Jackson's amazing performance of "Billie Jean" on the Motown 25 television special), and remixes by Kanye West and will.i.am, among others. (info from Slate & Wilipedia)
Posted by Michael N. Marcus at 5:19 AM