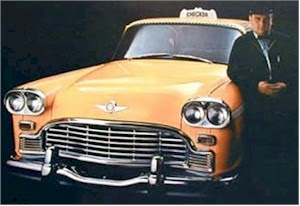 In the early 1900s, Morris Markin, a Russian-born clothier in Chicago became the owner of an auto body maker when its owner defaulted on a loan. The facility made bodies for Commonwealth Motors which sold taxicabs under the Mogul name.

Checker Taxi – a privately-owned cab company in Chicago — had placed a large order for Mogul cabs with Commonwealth, which was nearly bankrupt. Markin merged the two companies in order to honor the contractual commitment with the Chicago Checker Taxi. Markin named the new business the Checker Cab Company.

John Hertz began in the taxi business in 1910, both building Yellow Cabs and operating the cab service. Because of plant overproduction, Hertz used the excess cars by renting them to patrons through his "Yellow Drive-Ur-Self" division (the forerunner of Hertz Rental Car). Seeing Hertz's success, Markin bought Checker Taxi Cab in 1937.

Markin also followed Hertz's business plan in having drivers open doors for the fares, and outfitted each driver with a uniform. Competition for fares was fierce in the 1920s, and the drivers began fighting between trips. The fighting between the two cab companies escalated to the point where Markin's home was firebombed. This prompted Markin to buy a factory in Kalamazoo, Michigan and relocate Checker.

Under Markin, Checker became the first cab company to hire African-American drivers and the first to require that drivers pick up all fares, not just white ones.

Hertz had sold his Yellow Cab to the Parmalee Transportation Company, but in 1929, after a suspicious fire at his stables killed his prized race horses, Hertz left the cab business, with Markin buying Hertz's shares and then acquiring another one-third in the company from Parmalee, thus taking control of both Parmalee and Yellow Cab.

While Hertz had sold off the cab business, the manufacturing arm went to General Motors, which wanted to sell it, and made Markin an affordable offer. Markin refused. Rather than eliminate the capacity of Yellow Manufacturing, General Motors entered the taxicab business as Terminal Taxi Cab, and a second fare war broke out, with Checker and Terminal fighting in New York City. To end this dispute, New York Mayor Jimmy Walker created the New York Taxi Cab Commission, which ruled that all cabs in New York had to be purpose-built cabs, not consumer car conversions.

Markin sold Checker Cab to E.L. Cord, but bought it back agin in 1936. In 1940, Parmalee (including Yellow and Checker Cab) became the largest cab company in the United States. Eventually, the cab company revenues exceeded those of Checker's automotive building division, and the company decided to enter the passenger car business in 1961.

In 1964 the State of New York pursued Markin and Checker on antitrust charges, alleging that it controlled both the taxi service and manufacture of taxis, and thus favored itself in fulfilling orders. Rather than allow Checker drivers to begin buying different brands of cars, Markin began selling licenses in New York City.

In 1977, seven years after the death of Morris Markin, retired GM President Ed Cole bought into Checker with the intent of re-energizing the company and developing a new, more modern Checker. Cole's plan was to purchased partially completed Volkswagen's from VW's new factory in Westmoreland, Pennsylvania. Cole was going to ship the VW's to the Checker Motor's factory in Kalamazoo, cut them in half, insert a section to lengthen the VW, raise the roof and then sell the reconfigured vehicle as a taxi. Shortly thereafter, however, Cole was killed is a plane crash.

The iconic Checker "Marathon" model was introduced in 1961 and used for cab service in many cities, and was frequently seen in movies and on TV. The company even produced a civilian version that achieved cult status.

The Marathon design dated back to the mid 1950's, which caused a number of problems later on. Impact absorbing bumpers were added when required by federal law and then the steering column/wheel were changed when a collapsible column was also required for safety reasons. The rear fold-down jump seats were also removed as they failed all safety tests. The car had very poor gas mileage as the tall front end and hood made for poor aerodynamics. Many body stamping dies were worn out after over 20 years of continuous use, requiring manual body adjustments to make the parts fit.

With the Marathon model thoroughly outmoded and no longer selling in viable quantities, and lacking the resources to develop a new model, Checker decided to leave the auto manufacturing business.The last models were produced for the 1982 model year. Checker Motors today operates as an automotive subcontractor, primarily for General Motors, building mostly body components. (info & photo from Wikipedia)
Posted by Michael N. Marcus at 5:02 AM