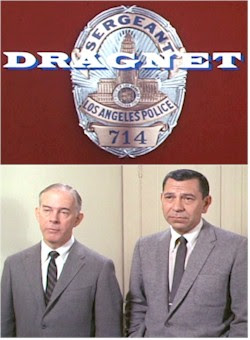 The show takes its name from an actual police term, a "dragnet", meaning a system of coordinated measures for apprehending criminals or suspects. Physical dragnets are used for fishing.

Set in Los Angeles, it starred jack Webb as Sergeant Joe Friday. Joe's lines, "My name's Friday, I'm a cop," and "Just the facts, ma'am" have inspired generations of advertising copywriters and jokesters.

Episodes were based on real crimes, and started with "The story you are about to see is true; only the names have been changed to protect the innocent." An announcer described the basic premise of the show, for example, "You're a Detective Sergeant, you're assigned to auto theft detail. A well organized ring of car thieves begins operations in your city. It's one of the most puzzling cases you've ever encountered. Your job: break it."

The story then usually began with footsteps and a door closing, followed by Joe Friday intoning something like: "Tuesday, February 12. It was cold in Los Angeles. We were working the day watch out of robbery division. My partner's Ben Romero. The boss is Ed Backstram, chief of detectives. My name's Friday."

Friday offered voice-over narration throughout the episodes, noting the time, date and place of every scene as he and his partners went through their day investigating the crime. The events related in a given episode might occur in a few hours, or might span a few months. At least one episode unfolded in real time: in "City Hall Bombing" Friday and Romero had less than 30 minutes to stop a man who was threatening to destroy the City Hall with a bomb.

At the end of the episode, announcer George Fenneman would relate the fate of the suspect. They were usually convicted of a crime and sent to "the State Penitentiary" or a state mental hospital. Murderers were often "executed in the manner prescribed by law." Occasionally, police pursued the wrong suspect, and criminals sometimes avoided justice or escaped.

Specialized terminology was mentioned in every episode, but was rarely explained. Webb trusted the audience to determine the meanings of words or terms by their context, and furthermore, Dragnet tried to avoid the kinds of awkward, lengthy exposition that people wouldn’t actually use in daily speech. Several specialized terms (such as "A.P.B." for "All Points Bulletin" and "M.O." for "Modus Operandi") were rarely used in popular culture before Dragnet introduced them to everyday America. (some info from Wikipedia)
Posted by Michael N. Marcus at 5:27 AM