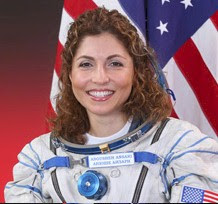 On September 18, 2006, Anousheh Ansari paid $20 million to ride on the Russian Soyuz TMA-9 capsule, and became the first woman to vacation in space.

Anousheh was also the first Iranian in space, first Muslim woman in space, and the fourth private explorer in space.

She blasted off for an eight-day expedition aboard the International Space Station as part of the Expedition 14 crew of the Soyuz TMA-9, which included NASA astronaut Michael Lopez-Alegria and Russian cosmonaut Mikhail Tyurin.
Posted by Michael N. Marcus at 5:28 AM

This is a fantastic presentation which captures what technology is all about. Thanks you for sharing and may you have many thought provoking conversations!