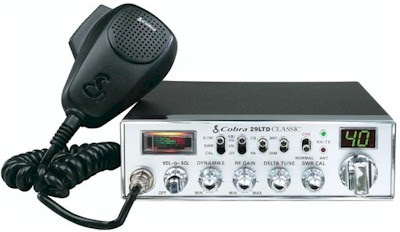 Citizens' Band radio (CB) is a system of short-distance radio communications between individuals on a selection of 40 channels within the 27MHz (11-meter) band. CB radio service should not be confused with amateur ("ham") radio or Family Radio Service ("FRS").

It's available in several countries, with varying requirements for licensing and differing technical standards. In many countries, CB does not require a license and, unlike amateur radio, it may be used for business as well as personal communications.

The Citizens' Band radio service originated in the United States as one of several personal radio services regulated by the FCC. These services began in 1945 to permit citizens a short-distance radio band for personal communication.

Originally, CB was located in the 460 MHz–470 MHz UHF band. There were two classes of CB: A and B. Class B radios had simpler technical requirements but were limited to a smaller range of frequencies.

Over time, several countries have created similar radio services. While they may be known by other names, such as General Radio Service in Canada, they often use similar frequencies (26 to 28 MHz), and have similar uses, and similar issues with antennas and propagation. Licenses may or may not be required, but eligibility is generally simple.

In the 1960s, the service was popular with small businesses (particularly tradesmen such as electricians, plumbers and carpenters), as well as truck drivers and electronics hobbyists.

With the advancement of solid-state electronics, the weight, size, and cost of the radios decreased, giving the general public access to a communications medium that had previously been only available to specialists. Many CB clubs were formed, and a special CB slang language evolved, used alongside 10-codes similar to those used in the emergency services.

Following the 1973 oil crisis, the US government imposed a nationwide 55 mph speed limit, and fuel shortages and rationing were widespread. CB radio was often used to locate service stations with a supply of gasoline, to notify other drivers of speed traps, and to organize blockades and convoys in a 1974 strike protesting the new speed limit and other trucking regulations.

The prominent use of CB radios in 1970s-era films such as Smokey and the Bandit (1977), Convoy (1978), and television shows like Movin' On (debuted 1974) and The Dukes of Hazzard (debuted 1979) bolstered the appeal of CB radio. Moreover, popular novelty songs such as C.W. McCall's Convoy (1976) helped establish CB radio as a nationwide craze in the USA in the mid- to late-1970s.

Originally, CB required a license and the use of a call sign, but when the CB craze was at its peak, many people ignored this requirement and used made-up nicknames or "handles". The many restrictions on the authorized use of CB radio led to widespread disregard of the regulations, most notably in antenna height, distance restriction for communications, licensing and the use of call signs, and allowable transmitter power. Eventually, the license requirement was dropped entirely.

Originally, there were only 23 CB channels in the US. The present 40-channel plan did not come along until 1977. Channel 9 was reserved for emergency use in 1969. Channel 10 was used for highway communications, though channel 19 later became the preferred highway channel in most areas.

Throughout the 1970s and early 1980s, a phenomenon was developing over the CB radio. Similar to the Internet chat rooms a quarter century later, the CB allowed people to get to know one another in a quasi-anonymous manner. Many movies and stories about CBers and their culture developed.

In more recent years, CB has lost much of its original appeal due to the advancement of technologies and changing values. Some of this rapid development includes: cellphones, the Internet, and Family Radio Service. The changing radio wave propagation for long-distance communications, due to the 11 year sunspot cycle, is always a factor for these frequencies. In addition, CB in some respects became a victim of its own intense popularity. Because of the millions of users jamming onto frequencies during the mid-to-late 1970s and early 1980s, channels often were intolerably noisy and communication became difficult. Many CBers started to use their radios less frequently or not at all after this period. (info from Wikipedia)Your humble blogmaster was co-author of CB Bible, published by Doubleday in 1976.
Posted by Michael N. Marcus at 9:37 AM