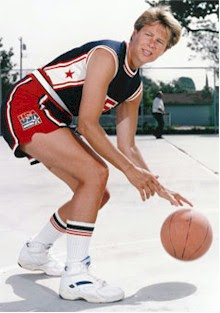 Women began playing basketball less than a year after the game was invented in 1891.

The only body parts women exposed to the public were fingers, necks and heads. Miniskirts were a thing of the future. Proper women wore floor-length dresses everywhere, including the basketball court. That led to a few proper broken bones and proper black eyes, because women had a tendency to trip over their hems.

But it was a great moment in the infancy of women's basketball when bloomers were introduced at Sophie Newcomb College in New Orleans by Clara Gregory Baer, in 1896. They were championed by, of all things, a man.

Dr. Edward Morton Schaeffer wrote a ringing diatribe against the corset, calling it a "figure and health-wrecking contrivance." He urged active modern women to "burst all confining fetters and curtail necessary impediments of costume," and to adopt a divided skirt to ease locomotion when exercising. After all, Schaeffer pointed out, ancient women of the Far East invented trousers in the first place. Men didn't start wearing them until conquering Persians took them from women. So these WNBA players today, in their fashionable pants, are wearing what belonged to them in the first place. A woman in pants, Schaeffer argued, is "simply receiving stolen property."

A Smith College girl, Senda Berenson, was the foremother of women's basketball - the visionary responsible for bringing basketball to the kinder, gentler sex. James Naismith invented the game because his superiors at a Springfield Massachusetts YMCA school ordered him to create an indoor activity for his overly aggressive young students during harsh winter months when they had no outdoor outlet available for the venting of massive amounts of testosterone.

Berenson read an article that Naismith wrote and wondered if the game would be a good activity for women. At the time, those words "gender equity" didn't exist. It was another three decades before women were allowed to vote for a president.

Women were thought of - even by women - as wilting and subservient. If women had suggested that they could play a man's game like a man, it would have outraged men and women alike.

Even Berenson worried that women might suffer from "nervous fatigue" if games were too strenuous. So she adapted the rules to make it easier for women to play and more acceptable for society matrons to embrace. She divided the court into three sections and required the players to stay in their assigned areas. To insure womanly decorum among her pupils, Berenson forbade snatching the ball, holding it for more than three seconds, or dribbling it more than three times. In this way, Berenson hoped to prevent a young lady from developing "dangerous nervous tendencies and losing the grace and dignity and self respect we would all have her foster."

But for all of Berenson's antique-sounding notions, she was actually a progressive woman for her time, Berenson recognized that one of the most common arguments against giving women equal pay at work was that they were prone to illness. "They need, therefore, all the more to develop health and endurance if they desire to become candidates for equal wages," she said.

Barely 11 months after Berenson introduced the game at Smith, the first official game between two institutions took place when the University of California-Berkeley played the Miss Head's school. By 1893, the women of Mt. Holyoke and Sophie Newcomb were playing, too. By 1895, the game was played all across the country, most prominently at Wellesley, Vassar and Bryn Mawr. The rules depended on where it was played and committees met endlessly to discuss regulations.

Sometimes they used men's regulations; other times they used the curtailed versions played by Smith. Technique also varied. The one-hand set shot was considered the most elegant form of shooting among southern girls at Sophie Newcomb. The two-handed throw was declared a foul because it caused the shoulder to fowardly incline, "with a consequent flattening of the chest."

But no sooner had basketball taken hold in women's colleges that an outcry arose that it was eroding sacred concepts of womanhood. Previously well-bred young ladies could be seen running and falling, shrieking in excitement and, worst of all, calling each other by nicknames. (Yo, Queenie! Take her out!)

Games would end with handkerchiefs and hair pins scattered all over gymnasium floors. It befuddled some of the sports writers. One article in the Los Angeles Times had a headline that said: "Sweet Things Have Scrap." It went on to furnish details of a high school game that included a lot of hair-pulling, tumbling and sliding. The reporter wrote: "There was something disquieting in the grim and murderous determinations with which the young ladies chased each other all over the court."

This masculine behavior was so scandalous a development that parents forbade their daughters to participate, and medical doctors and physical education instructors wrote long worried studies about the psychological and physical effects of the sport, calling for it to be abolished.

A physical education teacher named Agnes Childs complained of these tendencies in 1905 in a Spalding guide to women's basketball. "There is an irresistible temptation when a ball is rolling along the floor for the players in the vicinity to go sliding after it; and nothing makes a game more rowdyish in appearance and causes more adverse criticism that this most natural temptations to go after the ball by the quickest means."

Another leading physical education authority of the time, Agnes Wayman, proposed still more rule restrictions to make the game more compatible with popular views of femininity. She espoused "neatly combed hair, no gum chewing or slang, never calling each other by last names and never lying or sitting down on the floor."

Berenson, too, recognized that if the game did not improve its reputation for womanliness, women might not be allowed to play it. She also struck on the ideas of aligning games to social affairs, serving refreshments or even elaborate dinners afterwards. This was known as the "Cookies and Milk" strategy.

Ann Meyers revolutionized the game in the 1970s. A four-time All-America at UCLA, she signed a one-year, $50,000 contract with the NBA's Indiana Pacers. Meyers received a tryout, but did not make the team. She is the first four-time Kodak All-American, male or female, and led the UCLA Bruins to the 1978 NCAA title. She also competed in volleyball and track and field in college. She earned a silver medal as part of the first women's US Olympic Basketball team in 1976 and was the first high school player to make the women's national team. She is a scratch golfer and considered playing on the LPGA Tour. Ann has also done broadcast commentary for men's and women's basketball, softball, tennis, volleyball and soccer. She has been inducted into the UCLA Sports Hall of Fame, the Women's Sports Hall of Fame, the National Basketball Hall of Fame and the National High School Hall of Fame.

As women's basketball grew out of its infancy, women continued to struggle with somehow balancing femininity with athleticism. As the sporting woman gained acceptance, old passive definitions of beauty presented a dilemma. Men still wanted women to be beautiful, and women cared about their appearances, too.

In a comprehensive history of the game, a book called A Century of Women's Basketball: From Frailty to Final Four, another extraordinary story illustrates the tension between athleticism and femininity. In 1936, a team of gifted women called The Red Heads toured the country playing exhibitions against men's teams. Team members were required to wear makeup, look beautiful and play well. They were also required to either wear red wigs or dye their hair red.

Obviously, progress was a long time coming. But it got here, inevitably. Not until 1924 did women self-govern their basketball competitions. The three-section court wasn't reduced to two sections until 1938, which was two years after men began playing basketball in the Olympic. Women started 40 years later.

In 1971, women were finally considered robust enough to play a full-court game, and in 1985, Senda Berenson became the first woman to make the Naismith Memorial Basketball Hall of Fame. (info from an article by Sally Jenkins for WNBA, and autographedtoyou.com)
Posted by Michael N. Marcus at 4:42 AM